Brand experts everywhere are scratching their heads about how the candidates (“brands”) in the current primary system are challenging beliefs and apparently re-writing the rules. The candidates in both political parties are exhibiting unpredictable, and in some cases abhorrent, behavior. We have looked beyond the immediate to remind ourselves that there are very true and proven principles about short and long-term brand development. Lest we forget, great, powerful, sustainable brands do share important characteristics. They are:

Clear and focused. Powerful brands know what they stand for and stay focused on their core positioning. Rather than bounce around with multiple promises, they understand the need to be almost singular in purpose. At this stage of the run up to the primaries, some of the candidates have demonstrated clarity and focus, and they are being rewarded for this.

Authentic and true. Great brands are authentic. Authentic brands understand what they are and do what they say. Their behavior is consistent with their promises. That means that the organization making the brand promise must be congruent. So “brand” goes way beyond communications or image. It is a mandate for behaviors. Love a candidate or not, those that rise to the top are true to what they are and do not get distracted.

Truthful and honest. Brands that win, over the long haul, are ones that are true and honest. They don’t duck and weave between claims they make, but say things that they can back up. The gap between truth and fabrication will be a key determinate over the longer run.

Transparent. Strong brands develop a level of transparency so their key audiences understand that they are telling the truth, and not hiding or shielding key information. They understand that this transparency is the basis of the bond they have with their advocates. It would be fair to say that all the candidates, in both parties, are not transparent enough. Some believe that shouting louder masks the need to be transparent. In the long term, this strategy rarely works.

Consistent. Brands that last understand the need to be consistent over time. Brands that fail flip-flop from one position to another to satisfy immediate needs usually fail. That is because, in the long term, consumers and voters scratch their heads being unable to attach clarity and purpose to a constantly shifting target.

Delivery focused. Many brands can induce trial by making compelling claims and promises but only brands that actually deliver on promises will endure and develop loyalty. Consumers don’t tolerate bait and switch, and what may push a short-term victory could actually develop long-term detractors.

Shouting the loudest is not an enduring platform for a brand. It certainly gets media coverage and awareness. But in the end, it is the guiding principles above that will shape the outcome and the future.

We believe that the degree to which a candidate embraces these principles will determine their long-term viability. Not just in their electability, but also in terms of their effectiveness. So while the American electorate is attempting to select one “brand” over another, those that survive over the long-term will have met the test better than others.

And despite the fact that they have been around for a long time – Jim Beam was founded in 1795 and Maker’s Mark in 1958 – these brands continue to enjoy organic growth, and are benefitting, possibly even contributing to, a resurgence in the popularity of bourbons and whiskeys globally. END_OF_DOCUMENT_TOKEN_TO_BE_REPLACED

“Cheesepocalypse” and the Importance of the Velveeta Brand

Ad Age reported that Velveeta inventory is running low, just as Superbowl parties are only a few weeks away. This has created yet another media feeding frenzy. The Chicago Tribune calls it “Cheesepocalypse”. But the underlying reason is quite deep. Velveeta has earned our trust as a brand that hasn’t changed, and in the confusing world we live in, anchor brands are very important. Moreover, anchor brands like Velveeta often become part of a national tradition, a cultural touchstone that has meaning and value beyond the functionality of the product. 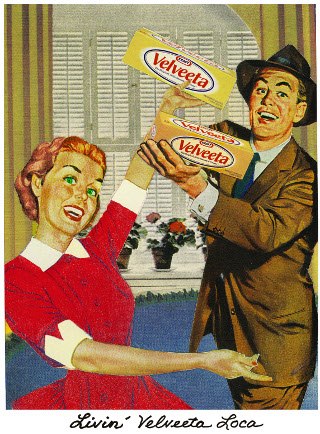 Velveeta was invented in Monroe, NY in 1908 at the Monroe Cheese Company. By 1923, it was spun off into the Velveeta Cheese Company and subsequently sold to Kraft Foods. In the early 1950’s, the product was reformulated into a cheese spread, and has not wavered since. Used as a base for dips, and in sandwiches and macaroni and cheese, it has been a staple in homes in North America and Canada. It is also an ingredient in dips at Superbowl parties everywhere. END_OF_DOCUMENT_TOKEN_TO_BE_REPLACED

January 10, 2014   Comments Off on “Cheesepocalypse” and the Importance of the Velveeta Brand

Because the origin of Shared Services is rooted in cost cutting, there is a naturally built-in   stereotype that what costs less must not be as good. But this doesn’t have to be the case. Strengthening the Shared Services brand, especially to internal audiences, is a very powerful way to communicate the positive value of a Shared Services model. Aside from the corporate arguments that Shared Services are really about reducing costs, you should be promoting the realization that there is an enormous amount of condensed wisdom in a Shared Services organization. It is, de facto, the central node of knowledge and insight. Imagine if internal customers understood this value and could tap into it. So use the brand to focus their attention.  END_OF_DOCUMENT_TOKEN_TO_BE_REPLACED

END_OF_DOCUMENT_TOKEN_TO_BE_REPLACED

First, they called me at home to market something. I guess there should be nothing wrong with that, but then again, I expect better than retail treatment as a Citigold member. Perhaps they were calling about a fraud issue, or an observation about how I could manage my account better. But they weren’t. END_OF_DOCUMENT_TOKEN_TO_BE_REPLACED

Santa Claus not in Jeopardy after Centuries of Careful Brand Management

One of the world’s oldest brands is still soaring. Santa Claus, also known as Saint Nicholas, Father Christmas, Kris Kringle, Chriskindl, or Père Noël is geared up to bring gifts to the homes of good children everywhere. So many have asked what are the secrets to sustaining a strong brand over the centuries. This post will attempt to shed light on this superior feat of brand management.

END_OF_DOCUMENT_TOKEN_TO_BE_REPLACED

From a marketer’s standpoint, the resurgence of the Ford brand is a monumental success. It wasn’t but a few decades ago when Ford was viewed just like the other big three auto manufacturers. END_OF_DOCUMENT_TOKEN_TO_BE_REPLACED